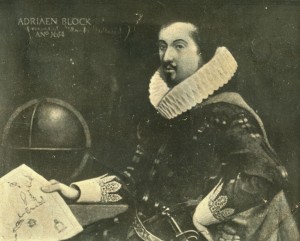 As with Henry Hudson, a true portrait of Dutch mariner and merchant, Adriaen Block, does not exist. Block, a dyed in the wool “traveling salesman,” made a total of three trips to the Muhheakantuck Valley and, in 1614, returned with a detailed map of the area. He is credited with the “discovery” of the straits of Long Island Sound, the Connecticut River, and determining that Manhattan and Long Island are both islands.

This image is based on what is written about Block in an important primary source. In it, he is noted as the most important figure in the early years of exploration in the Hudson Valley. New research, however, indicates that he was not the primary or sole leader and that the historical credit he has received should be shared with others.

Block was never a formal associate of the New Netherland Company founded in 1614. The mentioning of his name in the 1614 state license refers to previous trips. In 1615, Block was appointed the Commander of the Northern Fleet, with his ships focusing on whaling around Spitsbergen. Block died in his home in Amsterdam in 1627.