Dutch Barns contribute to the return of the church owl 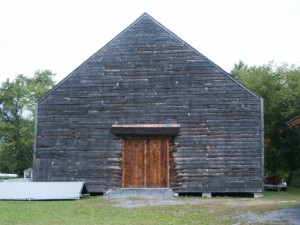 In addition to the presence of Dutch houses, the Hudson Valley’s architectural holdings include several typical Dutch Barns that stand as evidence of the Dutch presence in the area. These barns are characterized by about ten meters high, gabled roofs and four meter high walls. The floor space is typically square in shape with the roof’s support provided by H-shaped beams. In 1985, owners, historians, and concerned individuals joined together to create the Dutch Barn Preservation Society (DBPS) to stop the rapid deterioration of these iconic pieces of the region’s history. In June 2012, the Society began building and installing a number of nesting boxes in the barns in an attempt to support and restore the barn owl population in the eastern part of New York. http://www.dutchbarns.org/index.html