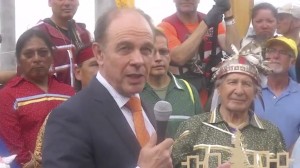 On August 9, 2013, Consul General of the Netherlands in New York, Rob de Vos, greeted two hundred paddlers participating in the Two Row Wampum Campaign. The paddlers traveled from Onondaga Lake through the Mohawk and the Hudson Rivers to Manhattan. In his moving speech, de Vos thanked the Haudenosaunee for welcoming the Dutch four centuries earlier and for teaching them how to survive in the New World. By smoking a ceremonial pipe of tobacco with some Haudenosaunee chiefs, the Consul General reconfirmed the Two-Row Wampum treaty and undermined the authority of academic historians who believe that traditional oral history (in this case, that of the Native American nations) is not reliable and, therefore, not usable. Some American academics tried to discredit these events perhaps for fear of weakening the “historical reasons” supporting the notion that the Hudson Valley should remain “Indians-free.”