Henry Hudson: His obsession led to his death 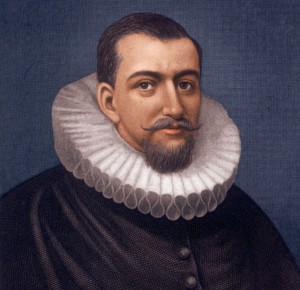 This portrait is an artist’s impression of how Henry Hudson might have looked. The man, after whom so many geographic locations are named: – a river, a bay, a strait, a county, and a town. How then was Hudson never considered important enough to be immortalized in paint? Perhaps this assessment is correct. Perhaps all his great “discoveries” were, in fact, mere accidents along his obsessive quest to locate a northern passage to the Pacific Ocean. His relentlessness was to be his end. During the 1611 journey, circumstances caused his crew to turn against him. Henry Hudson, his son John and some other loyal crew members were put in a sloop, to be never heard of again.

Hudson rose to prominence after the acquisition of New Netherland by the English in 1664 and was categorized as a hero when his name is given to NY locations, as his journey became a means to justify England’s claim on this land. Similar to the myths of Jamestown and the arrival of Pilgrims, Hudson’s emergence as a hero seems to be designed to support the hegemony of the British.