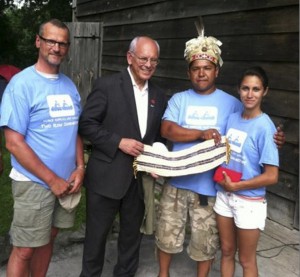 In 2013, the Haudenosaunee, the people of The Six Nations (formerly the Iroquois Confederacy), commemorated the ‘treaty,’ according to their oral history, finalized in or around 1613, between their nation and the Dutch merchants. The treaty agreement was commemorated with a grand event where natives and non-natives paddled canoes, side-by-side, from Onondaga Lake through the Mohawk and Hudson Rivers to Manhattan. They arrived in Manhattan to participate in a indigenous peoples conference of the United Nations. The conference received a lot of criticism from the academic-historical world, especially since the treaty document that served as the basis for the commemoration turned out to be a forgery. Nevertheless, some believe there is an ‘agreement’ that is sealed by a Two Row Wampum Belt: a broad band of white wampum beads with two parallel rows of purple beads. The belt symbolizes the coexistence of the Native Americans and the Dutch, equal and parallel, sailing on the river of life: the Dutch in their sailing ships, the Native Americans in their canoes. This belt seals a mutual vow of friendship, peace between peoples, and respect for each other’s worlds.

In the photo: Haudenosaunee, Hickory Edwards, and his then wife, Elena Duny, handing a replica of the Two Row Wampum Belt to Congressman Paul Tonko; Far left: Hubert de Leeuw.