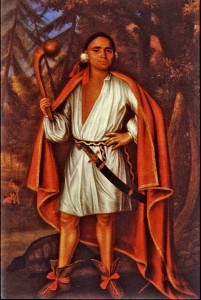 In the Anglo-Saxon historiography the original inhabitants of North Eastern America are one dimensional: they are portrayed as “savages”. However, the trade relationships these “savages” developed with the Dutch paint a very different picture. In addition, these inhabitants agreed to and likely assisted in the construction of a trading post, Fort Nassau, within their territory. These actions are significant contributions to the history of the region and the City and State of New York.

The Mohican chief, Etow Oh Koam, was immortalized in this painting in 1710 by the Dutch painter, Jan Verelst, during his visit to British Queen Anne where he was accompanied by three Mohawk chiefs. The four chiefs’ visit to London was a historic landmark as was the trip of two Mohican chief’s sons, Orson and Valentine, to visit Prince Maurits of the Netherlands one hundred years earlier.